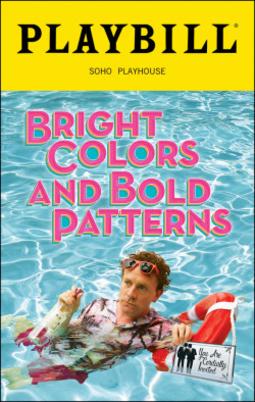 Off-Broadway at the SoHo Playhouse

I love getting to the meaning of a show’s title.  It can be subliminal, or definitive, but you will never find it quite so funny in its context as you do here in Bright Colors and Bold Patterns, a riotous one man show starring Drew Droege, who also wrote it, and directed by Michael Urie, a guy who knows how to make funny happen on stage.  I’m not giving it away just yet, so you will just have to read on.

Gerry (Drew Droege) has just arrived at the Palm Springs home of his buddy Dwayne and his new boyfriend Mack, who’s apparently eye candy in a speedo (or schlong thong, as Gerry likes to call it) and much younger than Dwayne.  I say apparently because we can’t actually see either of them.     They exist for the sake of the conversation, but they need to be imagined,  and imagine you will.  Droege masters the art of the one-sided conversation.  It’s no easy task, and he totally pulls it off as you begin to conjure the guys lounging around the pool, drinking cocktails.  Gerry has a kind of nervous energy, he’s angry, opinionated, fast-talking, and even though he is no prize himself, (middle aged with an imaginary boyfriend, hiding his gay shame beneath an oversized Hawaiian shirt and baggy shorts) he has something to say about everyone and everything including Dwayne’s home décor which he likens to Betsey Johnson and Trina Turk throwing up and selling it to Walmart.    The conversations continue, and he pulls out the wedding invitation of Josh and Brennan who are getting married tomorrow, and the reason Gerry has come to town.  Now we get to the punchline and the center of Gerry’s angst when he reads the small print at the bottom of the wedding invitation that says, “please refrain from wearing bright colors and bold patterns.” Do I need to explain the irony of this?  I’m not going to, but if you don’t find this extremely amusing and wrong in so many ways then you may need to purchase a book called Gay101 for Dummies.  Other clever dialogue includes Gerry pausing, and then looking very serious, says “I do need to say something” …. because what if he didn’t?  I know this worked in the movies, but silent theatre?  There is a lot of word play that makes the fact that he is the only one talking out loud very comical.   Neil is the next and last guest to arrive (in spirit).  Gerry and Neil do not like each other, and this all goes back to a time when Gerry accidently mistook Neil’s refrigerator for the toilet. I’ll leave it there.   Day turns to night as the  booze and drugs  flow along with Gerry’s stories.  It’s an all-nighter of total insanity with a touch of tenderness, as Gerry passes through various degrees of consciousness with his friends.   The story goes a little deeper than superficial, but not enough to ruin the camp of it.   Even though Drew got a standing ovation for his performance, I felt a little bad for Dwayne, Mack, and Neil who got no credit or applause at all.  I heard they even didn’t get paid!

I know you straight people are wondering if you need to be gay to get the humor of this, and my response is absolutely not.  The five straight people I counted in the audience were all laughing their asses off.  See bright and bold at its best.  Just extended through April 9,  2018.  For tickets and more information visit ​https://www.brightcolorsandboldpatterns.com and check for available discounts at my website here.  ThisbroadSway 11/20/2017