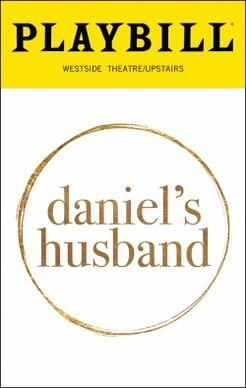 In this current day production written by Michael McKeever, daniel’s husband explores love, marriage, and the fragility of life in a gay world.

In the opening scene we find ourselves in the modernly appointed living room of Daniel (Ryan Spahn) and Mitchell (Matthew Montelongo) who are entertaining Barry (Lou Liberatore),  Mitchell’s agent, and Trip (Leland Wheeler), Barry’s latest barely legal boyfriend.   The atmosphere is relaxed and playful, and the four guys are enjoying after dinner conversation, and word games.  Mitchell is an accomplished writer of Gay “bubblegum” novels, and Daniel and acclaimed Architect.  Together for seven years,  they  seem to have it all.   When Trip assumes the two are married,  Mitch explains he does not believe in marriage,  gay or otherwise,  and breaks into an explosive and sometimes comedic diatribe.

Daniel’s mother Lydia (Anna Holbrook), a meddling and overbearing socialite, comes for a visit which puts Daniel into total discomfort as she takes over the household.  Lydia plays the all accepting modern woman, grateful for having a gay son.   There is obvious tension in the relationship that has been building inside of Daniel for years.   There is much discussion surrounding a painting in the room, which virtually hangs over the audience, and is often referred to as angry.     The painting  becomes the final character in this  emotional play.   Everyone has their own opinion of the painting  by Daniel’s Father who died 12 years earlier.  Daniel loves it and you can see the connection he feels and pride he maintains for his father in the art.  It is also a reminder of his resentment to his cold and selfish mother who has always tried to control everything.    We don’t see the explosive exchange between Daniel and his mother when he lets out years of pent up anger on her, but we know it happens when Mitchell returns from dropping her off at the airport.

Daniel and Mitchell, finally alone, deconstruct the recent events and the visit from Daniel's mother.  Mitchell tells Daniel he has always had everything he wanted in life and Daniel states he desperately wants to be married, as he gets down on one knee.  The conversation gets heated as Mitchell’s disdain for marriage sets off another heated exchange, but he angrily agrees to do it.  This is when things take a nasty turn as  Daniel has a seizure that we soon learn is a stroke that leaves him entirely paralyzed with a condition called “locked in syndrome”.  There will be no wedding, no health care proxy, no more life as they knew it.

As if it could not get worse for Daniel and Mitchell, Lydia decides that Daniel would be better served by coming to live in her home, with a full time medical staff, and takes the matter to court in a gut wrenching finale.

This  well constructed production directed by Joe Brancato  tells a story that most of us can relate to on a personal level.   The sound (William Neal) and Lighting  (Jeff Croiter) play vital roles in amplifying the major life events and are a backdrop to the impeccable acting of this compact cast.  The set (Brian Prather) is stylish with contemporary furnishings, and  warm wood tones contrasted with cool brick surroundings.

Is it possible for Mitchell to lose the love of his life twice in one act?   Go find out now through February 3, 2019.   For tickets and more information visit http://danielshusband.com/#home​ and check out how to find available discounts at my website here.   -ThisbroadSway 10/26/2018