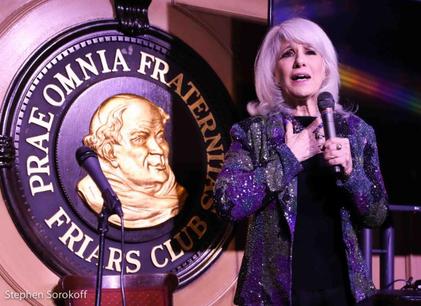 This is your Night Jamie deRoy

Tribute at the Friar’s Club

Usually when you attend a show containing the name Jamie deRoy, it’s all about giving back,  but tonight was a show just for Jamie, as she celebrates being 30 Years A Friar!

Jamie is honored with being the eight woman inducted as a Friar.  She joins a prestigious list  including Liza Minnelli, Joan Rivers, Barbra Streisand, Candice Bergen, Whoopi Goldberg and Barbara Walters to name a few.  Not only is Jamie a benevolent Friar, but her good works can be seen on Broadway, Off-Broadway,  in Cabaret and beyond as she has dedicated her life to the Arts, helping people at every level.  If you have spent any amount of time with Jamie you too were likely a recipient of her generosity.  She has a gift for bringing people together for a greater cause,  and the room was filled with many of those people that include her loyal friends, esteemed colleagues and loving family.

The very funny out and proud lesbian, Judy Gold was the MC for the night and kept the laughter going between the wonderful performances.  Benjamin Schemer got the show off to a roaring start with songs from his Off Broadway smash hit The Lion.  Frances Ruffelle, Broadway’s own Eponine from Les Misérables,  impressed with a couple of songs and a roar all of her own.  Master story teller Jim Dale told a tale, as only he can do.  Joe Benincasa, President of The Actors Fund spoke, holding Jamie in high regard for all the work she does to benefit this cause.  Joe quipped he had to speak fast because Jamie had five more events to attend tonight as well as select this year’s Tony Award winners, and for anyone who knows Jamie, it’s not far from the truth.   He finished borrowing this from Mark Twain:  “He liked to like people, and people liked him back”, and that’s Jamie.   Chuck Cooper who starred in the Prince of Broadway last year sang “Your Feet’s too Big”, and said even though Jamie has dainty feet, she leaves a big footprint on Broadway.  Rupert Holmes  sang his Pina Colada song “Escape”, which he told us he doesn’t do often, or for just anybody.  His songs have been sung from Barbra Streisand to Brittany Spears and joked that’s a lot of B.S. and that his first album and Jamie’s hair when platinum at the same time.  Judy Gold introduced fellow lesbian Julie Gold hinting that sexual preference is born in the last name,  but we all know that Julie has much more to her credit as the composer of Grammy Award winning song “From a Distance" which she performed to everyone’s delight.  Julie said that Jamie was nice to her even before she wrote that song.  Penny Fuller joined in on the celebration singing “Welcome to the Theatre”, followed by a Parody of “You’re the Top” that was written for Jamie by her long time director, and ever friend Barry Kleinbort.  The dashing Larry Gatlin got on stage introducing  his newest band member.  A conjoined guitar that he named Johnny/June (as in Cash).   He said he was tired of traveling with two guitars, so he had someone make this for him.  He played  Jamie’s favorite song he ever wrote,  “I’ve Done Enough Dyin’ Today” which he explained got off to a slow start and (went downhill from there) and followed with a Gatlin Brothers signature song “All the Gold in California”, that by the way, he wrote in eight minutes in a parking lot.

Friars Director of Programs, Bob Spiotto closed the night with a few gifts for Jamie.  A purple fan (Jamie is a ‘purple fan’), a bedazzled top hat because she is ‘one singular sensation’, and  a set of angel wings, which could serve a dual message. One is obvious, but the other is that Jamie is currently co-producing Angels in America on Broadway.   She was finally presented with her chair which she had been looking all over for after contributing a hefty sum for the honor.  It was hidden in plain sight right on the stage.

Jamie was clearly overwhelmed by the evening and thanked the room filled with her friends singing a an altered version of “The Rose” by Amanda McBroom, and that’s a wrap! Congratulations Jamie deRoy on your well deserved night and thank you for all you bring to our community.  You can view some fabulous photos of the night by Stephen Sorokoff at the this link.​​    -ThisbroadSway 4/11/18