King Kong
On Broadway at the Broadway Theatre

A larger than life King Kong awaits to capture your heart in this brand new musical directed by Drew McOnie and this is no monkey business.

A stunning Ann Darrow (Christiani Pitts) arrives in New York City with her suitcase and a dream to be the queen of Broadway and it’s nothing but disappointment until she meets the dashing Carl Denham (Eric William Morris).  Carl is a budding film director who offers the down and out Ann a meal and a chance at stardom in his next film.  It’s all aboard as Ann, Carl, and his faithful sidekick, Lumpy (Erik Lochtefeld) take sail on the SS Wanderer steamship with Captain Englehorn (Rory Donovan) at the helm to Skull Island.  The tension builds in anticipation of seeing the magnificent beast for the first time because let’s face it; this is the reason you came, and you won’t be disappointed.  Aside from Kong’s newly created sense of humor, It’s the same old story from there.  They capture the beast, bring it back to New York and put it on display.  Ann not happy, beast not happy, beast escapes, all hell breaks loose.

While Kong doesn’t make an appearance until well into the first act, you’ll enjoy a highly flexible and acrobatic ensemble that really get a workout with some extreme choreography (Drew McOnie) that combines classic dance with hip hop movements that are sharp and well executed.

When Kong finally appears, you will gape at the ape’s enormity, his muscular frame, and sharp gleaming white teeth.  His tremendous roar sends shockwaves through the theatre along with the thud of his huge appendages.  A pulley system operated by black clad aerialists (Gavin Robins) becomes a choreography to itself as they jump from the beast and bring him to life.  Kong was not the only one dressed for success, with the cast adorned in stunning period costumes (Roger Kirk), and creative work on ensemble cast that at times become part of the jungle scenery.  There was no expense spared on the elaborate set design (Peter England) that take you from an early New York City under construction, over the sea, and into the depths the jungle which are enhanced by use of a sophisticated video and projection system (Peter England/ Artists in Motion) that make the ship churn realistically and the beast appear to run at supersonic speeds.  Combined with suspenseful sound (Peter Hylenski) and dynamic lighting (Peter Mumford) these elements all play together to complete this thrilling production.

Pitts and Morris deliver this ballad filled score (Marius de Vries *) with elegance and vocal harmony, but there is no upstaging the real star of this show…. King Kong himself.   Can I get a Tony nod for the Best Leading Primate?   This is true work of master puppetry designed by Sonny Tilders.

You can waste time looking for the flaws in this musical, or you can take it for what it is and enjoy the thrilling adventure that awaits you.  It may not be a happy ending, but just go for the child that lives inside of all of us. For tickets and more information visit https://kingkongbroadway.com/ and visit my website HERE for how to find available discounts today –ThisbroadSway 11/7/2018 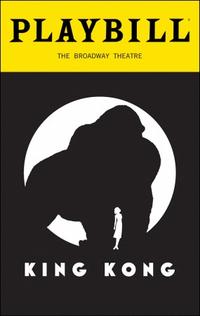