Meteor Shower
On Broadway at the Booth Theatre

Steve Martin may have found his comfort zone on Broadway after his beautiful Bright Star run was extinguished early last year.  Let’s face it, Steve Martin does comedy better than almost anyone and Meteor Shower is out of this world.

​Meteor Shower​ is a bunch of ‘takes’ on a similar story about two couples who get together in a Ojai, CA circa 1993 to watch a much-anticipated Meteor shower.  Ojai is in a remote area of southern California, and a great backdrop for viewing this event.  All scenes take place at the modern and stylish home of Corky (Amy Schumer) and Norm (Jeremy Shamos).  In the first scene Norm and Corky are ‘pre-wining’ before their guests arrive.  They are obviously living in a virtual therapy session carefully choosing their words and giving each other time-outs if they say something that offends the other. Soon they are joined by Gerald (Keegan-Michael Key) and his hot wife Laura (Laura Benanti).  Gerald is loud and obnoxious and he and Laura sling insults at their hosts with confidence, like when Laura looks around at the living room and says to Gerald, “we need a little nothing in the country.”  Corky and Norm remain polite at first, but this is only the first take.

In the next take and the ones that follow, there are both subtle and outrageous changes taking place in both the story and the relationships.   Every possible situation you would want to avoid with your guests happens, with conversation themes of cannibalism, three-some’s, obesity, kleptomania, and extramarital sex, and it is in this discomfort that we find hilarity, and very much in the style of that one ‘wild and crazy guy’ Steve Martin.

The couples are together, they are apart, sometimes it’s just the girls, or just the boys, but wherever they are, and whoever each is with, it all becomes inappropriate.  The action moves from the living room to the outdoor patio on this tasteful and spinning set (Beowulf Boritt).  There is wife swapping squared as everyone ends up doing it with each other at least once.  It’s all fun and games until Norm gets hit by a meteor (both guys get hit in different takes) leaving a smoking hole in him and the brand-new patio chair.  The comment that follows goes something like ‘the odds of being struck by a meteor are astronomical.'

This type of corny comedy only gets better delivered by this prominent cast of characters.  Amy Schumer is in class of her own in this arena and Keegan-Michael Key brings volume to this larger than life personality.   Benanti and Shamos balance out the others with a mostly subtler approach.

I know it sounds silly, but seeing a guy walking around with a smoking hole through his middle is not something you see every day, and you will probably laugh.  Not only will you find Meteor Shower ridiculously funny, inappropriate, uncomfortable, goofy and absurd, but you will leave the theatre feeling oddly satisfied. Meteor Shower is a limited run, so catch it before it closes on January 21, 2018.   For tickets and more information visit http://www.meteoronbroadway.com  and check my website for available discounts here  -ThisbroadSway 11/2017 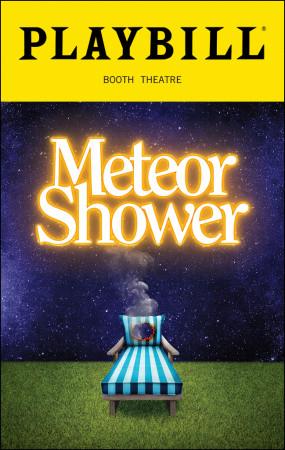