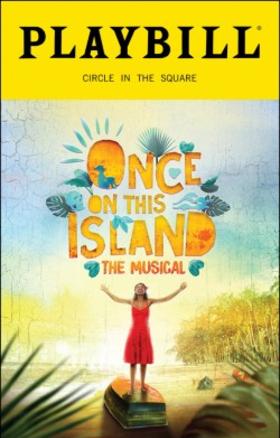 Once on This Island

On Broadway at the Circle in the Square Theatre

This Caribbean musical fantasy begins as soon as you enter the theatre which has been completely redesigned to make you feel transported to the small island using elements of both sand and water.   The cast of village peasants are moving about the beach-like open set, complete with a live goat in tow and are cleaning up debris from a recent storm where the story of Ti Moune begins.

When a powerful storm thrashes this small Island there are few survivors.  The Gods decide to spare the life of the little girl Ti Moune (Emerson Davis) by placing her in a tree.  She is taken in by the peasants Tonton Julian (Phillip Boykin) and Mama Euralie (Kenita R. Miller) who love and care for her.  The peasants live a simple, happy life.  They sing and dance and pray to the Gods for direction.  When the grown Ti Moune (Hailey Kilgore) appears, she longs to find her purpose and to see what lies beyond her tiny village.  She prays to the Gods Erzulie (Lea Salonga) of Love, Agwe (Norm Lewis) of Water, Asaka (Alex Newell) of Earth, and Papa Ge (Tamyra Gray) of Death and they gather around her as she sings “Waiting for Life”.   After making deals with and receiving the blessings of the Gods, Ti Moune sets out on her journey which becomes a complex story of sacrifice, survival and the forbidden love between her and Daniel (Isaac Powell).  Their island is divided by the racial tension between Ti Moune’s dark skinned peasant people and the grand homme, Daniel’s light skinned French descendants of Beauxhomme.  While the story does not have the happy ending I had hoped for, I certainly enjoyed the journey.

There is no denying that great shows are born of a talented cast which there is no shortage of here.  Newcomers Hailey Kilgore and Isaac Powell are breakout successes in these leading roles. Tony award winning Lea Salonga has the beauty and voice of a goddess and Tony nominated Baritones Boykin and Lewis have the rich and distinctive sounds that along with the rest of the lively and colorful cast elevate this powerful score by Lynn Ahrens and Stephen Flaherty.  Once on This Island joins in support of gender neutral casting with Papa Ge, traditionally a male role, played strongly by a female, Tamyra Gray, and Asaka, a female role, is played in drag by the campy and fabulous Alex Newell.  Island sounds combine with Caribbean dance moves (Camille A. Brown) that are vibrant and sometimes resemble a ritual tribal dance.

You will liken this experience to sensurround when breezes begin blowing through your hair and your seat rocks with the sound of thunder.  The set (Dane Laffrey) is filled with playful elements that are used with careful attention to detail including a fog that will have you believing you are floating above the clouds.    The live goat I understand was making his Broadway debut and is sure to get a nod in the best supporting ‘billy’ category.  There is an Island where rivers run deep, and you need not travel further than the Circle in the Square Theatre to see this magical place where the story of Ti Moune lives on.   Come and see why they tell the story.  Once on This Island is an open run.  For tickets and more information visit http://onceonthisisland.com and see how to find available discounts at my website here.  –ThisbroadSway 3/7/2018