I could almost write this review using the words and lyrics of Donna Summer’s music.  I just love Donna Summer and have danced away more nights than I can remember to her iconic tunes.  I was glad to have this last dance with the  Queen of Disco.

This production uses three Donna’s to tell the story.  A young Duckling Donna (Storm Lever), the Disco Donna (Ariana DeBose), and the fully developed Diva Donna (LaChanze).   Born in Boston LaDonna Adrian Gaines, she began her singing career in church.  Once grown, she set out for New York where she pursues a musical career that leads to a Musical Theatre run in Europe.  While there she marries Helmuth Sommer and has a daughter.  She meets up with record producers and her career begins to takeoff under the Groovy Record label, where a mistake on an album turned Sommer to Summer and it sticks.   She returns to the United States an International Pop Star and is eventually picked up by Casablanca Records with the mega hit “Love to Love you Baby”.  It was not always glamorous for Donna. Like most pop singing careers, there were many ups and downs.  She experienced abuse in childhood as well has her adult relationships. She had to make many sacrifices along the way, including leaving her daughter in the care of her family while she went on tour.   There was loneliness, depression, drugs and failed relationships.  While she was an LGBT Icon, she had her moment of adversity with the group when she made some derogatory anti-gay remarks that were likely born of her strong religious beliefs.  After a public apology, all was forgotten.  It was one time rumored that she was man and she joked ‘If that were true, I’d get paid more’.    Some things never change.  Her ending is a sad one, but she created a legacy that will live on forever.

The three Donna’s all did a tremendous job at bringing Donna Summer's sound alive, with LaChanze leading the pack with a powerful sound that vibrated the house and brought it to their feet.  The mostly female ensemble cast were incredible and androgynous playing dancing boys, and the few boys playing girls and delivered up the sexy and energetic choreography (Sergio Trujillo).  As you might guess, there was no shortage of bling in  this production,   including shimmering and colorful costumes (Paul Tazewell),  a sparkling set (Robert Brill) that included the biggest disco ball I have ever seen and cubes that popped out of the stage elevating the Donnas above the stage, showcased with dramatic backdrop of projections (Sean Nieuwenhuis).   At the finale, a blizzard of silver confetti rained down on the audience, which I was still finding in my bag three days later.

This story under the direction of Des McAnuff misses a beat or two but it didn’t matter to me, and it clearly did not matter to the audience, who at times were signing along, out of their seats dancing, or clapping to the beat.  Lets face it,  we are all here for the music, and music we got.   23 songs in all.  Don’t miss your last chance to spend 100 minutes with the undisputed Queen of Disco.    For tickets and more information visit http://thedonnasummermusical.com and see how to find available discounts at my website here.  -ThisbroadSway 4/21/18 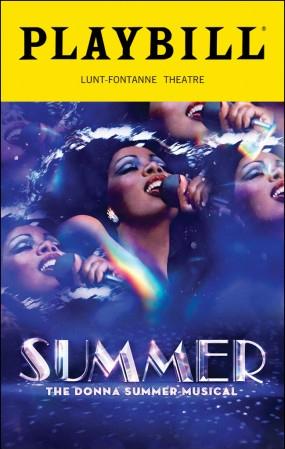