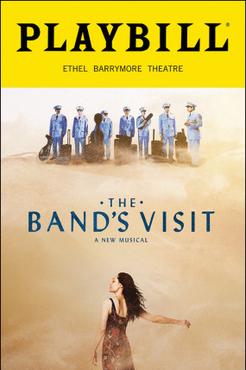 On Broadway at the Ethel Barrymore Theatre

As the saying goes, do not judge a book by its cover, I say do not judge a musical by its film version, especially when that film, which is relatively silent, takes on a whole new life on the stage with music  by dynamic composer David Yazbek and direction by  David Cromer.

This new musical follows an Egyptian Band that has been invited to perform at the Arab Cultural Center in Israel in a town called Petah Tikva. However, because of language barriers they are mistakenly directed to the town of Bet Hatikva in the middle of the Israeli desert, where there is no culture or much of anything else. This is when the fun begins.  This perfectly pressed Band of eight led by Tewfiq (Tony Shaloub) finds what appears to be the only cafe in town, which is run by Dina (Katrina Lenk), and serves as the local hangout.  This marvelous cast is made up of both symbolic and eclectic characters.  In the band Simon (Alok Tewari), who needing constant validation, tells everyone the story of his clarinet concerto that he has yet to finish, and ladies’ man Haled (​Ari’el Stachel), whose one pick-up line is “Do  you like Chet Baker?”, and then sings “My Funny Valentine,” one of Baker’s biggest hits. Your heart breaks for the boy at the telephone booth (Adam Kantor),​ who is waiting for a call from his love, and we wonder if the call will ever come as he sings “Answer Me" that will most likely bring you to tears.  The jobless Itzik (John Cariani) takes in a stranger, despite knowing the trouble it will cause with his wife and a new baby at home. If you are looking for underlying tension between Arabs and Jews, you will not find it here.  These residents of Bet Hatikva have nothing to give to these total strangers but kindness and generosity, giving them food and shelter even though they are almost entirely out of money.  This unlikely friendship between two cultures forms quite organically and we are reminded that life is not so different for any of us, as their inner secrets are revealed. We experience love, and loss, joy and heartache in the same way.     It’s just the kind of story we need today, which is perhaps another reason for this show’s fast-growing appeal.

This is one of those stories that has a magical way of becoming the story you want it to be. There is no denying that this hauntingly beautiful score, with its  warm and striking Middle Eastern tones gives this musical its mercurial pulse.  The band members often play their instruments bringing the orchestra out of the pit for brief moments, and adding delightful dimension to the music. The accents in both song and verse are carried out with precision by a flawless cast.  The role of Tewfiq was played by James Rana the night I attended (I believe Tony’s daughter was married this day, so we will give him a pass), but I did not feel cheated in any way, although I know that  Tony Shaloub has received accolades in the role he brought from the Atlantic Stages.  While Katrina Lenk has been seen in many Broadway Roles, this may very well be her most memorable as you will not soon forget her magnetic sensuality while singing “Omar Sharif.”

This Egyptian Band may get lost in the desert, but they had no difficulty finding  their place on Broadway and will more than likely find a place in your heart.  The Band’s Visit is an open run.  For tickets and more information visit https://thebandsvisitmusical.com.  As of this posting there are no discounts available, but you can see the rush ticket policies here.