The Gentleman Caller
Off - Broadway at the Cherry Lane Theatre

I bet not many people know that one of the original titles of The Glass Menagerie was The Gentleman Caller, and I only learned it myself whilst taking a peek  behind closed doors at one relationship between Tennessee Williams and William Inge as imagined by writer Philip Dawkins.

This memory play take place in 1944, and starts in St. Louis.  Tennessee Williams (Juan Francisco Villa) shows up for an interview at the apartment of an anxiety ridden journalist William Inge (Daniel K. Isaac). Inge can’t seem to get the interview started and it becomes evident that that he has both a professional and sexual infatuation with Williams but is unable to come to terms with his feelings.  The interview turns into an alcohol induced frenzy filled with sexual tension and many comedic moments.  Inge reveals his inner desires, and fears of rejection and near the end of the encounter pulls out a manuscript that he has never let anyone see until now.  The second encounter takes place a month later in Chicago on New Years Eve.  The two meet in Williams hotel room after the opening of The Glass Menagerie, the play that catapulted him to fame.  Inge is still uncomfortable in his own skin as Williams makes advances, but finally finds the acceptance he has been looking for when Williams tells him he read his manuscript and has given it his seal of approval.  This leads to an emotional ending and a powerful soliloquy by Inge. The playwright takes liberties in how far or not this contrived relationship goes.  In real life we know that Tennessee Williams and William Inge were friends, sometimes competitors, and Williams was influential in Inge's career.

Villa has swarthy good looks and fills this larger than life personality role complete with southern drawl. Isaac digs deep into his character and gives an emotionally charged performance. The chemistry between these contrasting characters brings forth an encounter that is filled with surprise and imagination.

The furnishings on the set (Sara C. Walsh) are anchored by  imaginative displays of stacks of zigzagging paper topped with lamps  that take on a mysterious glow under the lighting by Zach Blane.   The pillar-like objects will have you imagining the many writings of these two prominent dramatists.

Spend an evening with two of America's most famed playwrights, and see a side of them you could only  dream of. This Abingdon Theatre Company production runs only through  May 26th, 2018.  For tickets and more information visit http://abingdontheatre.org/gentleman-caller/  ​and check how to get available discounts at my website here  -ThisbroadSway 5/9/18 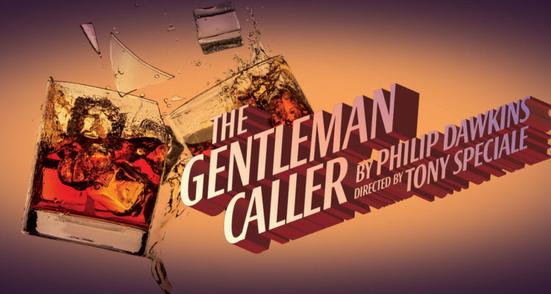