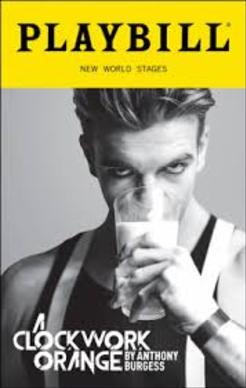 Anthony Burgess’  1961 cult classic of bedlam and mayhem comes to life in this new stage adaptation directed by Alexandra Spencer-Jones and will leave you asking the question:  Milk, does it really do a body good?

Alexander “Alex” (Jonno Davies) is a 15 year old classical music loving  sociopath. He and his violent droog gang, Georgie (Matt Doyle), Dim (Sean Patrick Higgins) and Pete (Misha Osherovich) drink mind altering milk ‘plus’ and go about terrorizing their neighborhood  in England.  The droogs don’t like much Alex’s bossy and abusive ways,  and hatch a plan that leaves  him helpless and alone after the vicious attack of a woman which later turns out to be a murder. He is sent away to prison for 14 years.    To get an early release Alexander agrees to undergo a new controversial treatment called the Ludovico Technique that claims to cure the violent behavior.  The treatment leaves Alex free but also  in torturous pain.  No longer able to commit a violent act or enjoy his beloved Beethoven, Alex resorts to  suicide which fails, but reverses the effect of the treatment.  Now back to his old self and part a new gang,   we see a softer side of Alex who appears to finally be growing up.  The movie version of this  ended darker than the original book which showed Alex somewhat reformed.  I think this stage production has our protagonist landing somewhere in between the valley good and evil.

A black box set with a bowl of oranges and four neatly arranged glasses of milk is a perfect backdrop to the black, white and orange tight fitting costumes (Jennifer A. Jacob).  Beautiful sound design (Emma Will) blends classical music,   with  more current  tunes like Frankie Goes to Hollywood’s “Relax”. Director, Alexandra Spencer-Jones is also credited with movement/choreography which is visually stunning and combines elegant movement with a dance.  The story  gets some homoerotic updating and stands up to the test of time.  It’s a sexually charged, gender-bending thriller with an extremely physical and beautifully sculpted all male cast.  The few women roles are portrayed through the use of orange aprons and high pitched voices.   Davies brings his critically acclaimed role direct from a sold out London run. His pure energy and magnetism will leave you gasping for breath.   For tickets and more information visit https://www.aclockworkorangeplay.com and check my website for available discounts here.   -ThisbroadSway 9/21/17