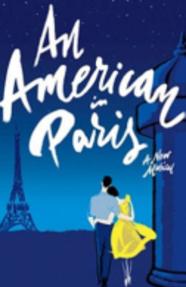 An American in Paris
On Broadway at the Palace Theatre

Some of you may already know that ThisbroadSway went international last year when I visited Paris to see this show in previews and actually became “the” American in Paris.  It was more than worth the trip, and I would do it all over again in a heartbeat.  But now I don’t have to go further than my own front door, because the long anticipated An American in Paris has opened on Broadway, and if it’s not the talk of the town already, it will be.


The ballet meets Broadway in this love quadrangle set in post WWII Paris.  We’ve got newcomers to the Broadway stage.  Robert Fairchild (Principal dancer, New York City Ballet) as Jerry Mulligan and Leanne Cope (The Royal Ballet) as Lise Dassin.   Fairchild and Cope are beautifully paired, and it’s a visual feast to see the two of them float across the stage.


As this musical opens, Jerry Mulligan is fresh out of the war and looking to make it as a painter in Paris.  He meets up with Adam (Brandon Uranowitz) another American artist who is trying to make it as a classical pianist.  The third male is Henri Baurel (Max von Essen), a Parisian who is obsessed with two things.  The first is he wants to be a nightclub singer, and is desperately trying to hide this from his wealthy, snobbish parents who do not approve, and second he does not know how to declare his love for Lise, his lovely girlfriend and classical ballet dancer.  By sheer coincidence both Jerry and Adam cross paths separately with Lise and both fall for her having no idea that she is already promised to their friend Henri.   Before you know it, Lise is caught up in this ménage a quatre and does not know whether to follow her heart or her obligation to do what is expected of her. (You will find out Lise’s secret that binds her to the Baurel family).  In the end only one man gets the girl, and we know it’s the right one.  I could tell you who it is, but in case you have not read the cliff notes, or seen the film, I’d rather you be surprised.  In the end, everyone gets what they want, including Milo Davenport (Jill Paice), the resident wealthy Cougar.  You will find the journey very enjoyable and easy to follow thanks to flawless direction and choreography by Christopher Wheeldon.


The first act will slowly warm you with numbers like “I’ve got Rhythm”, and “The Man I Love”, but nothing will prepare you for the 2nd Act where you are going to see dance taken to a whole new level and it will be like none other on Broadway from the Entr’acte to the Epilogue.    This is the kind of show where the audience kept applauding at the wrong times, because they just could not help themselves.


The motionless set and generous assortment of beautiful costumery can be credited to Bob Crowley.  The streets of Paris came to life on stage with the creative use of screens taking on cartoon like projections and props that all seemed to be an extension of the dance as they were moved on and off the stage by the remarkable ensemble cast who never seemed to tire.

As if world-class ballet dancers were not enough, we have this score by George and Ira Gershwin.  No edits needed.  Just press play and sing, and S’ Wonderful, Marvelous.  If you were worried that ballet dancers cannot sing, think again.  This marvelous cast and ensemble cast all take a leading role in this exquisite production that will leave you standing on your feet, violently clapping, smiling from ear to ear with tears rolling down your cheeks.  Who could ask for anything more?   For tickets and to read more about An American in Paris visit their website at http://www.anamericaninparisbroadway.com.  Also visit my website for discount tickets at http://www.thisbroadsway.com/discount-tickets.html ThisbroadSway 3/13/15