If there is any confusion about the saying opposites attract, this play will prove it true in this first revival of Lanford Wilson’s  Burn / This.

It’s 1987 and roommates Anna (Keri Russell) and Larry (Brandon Uranowitz) have just returned from the funeral of their friend and third roommate Robbie, who tragically died in a boating accident with his boyfriend Dom.  Anna’s boyfriend, Burton (David Furr) is also present.   They are talking about Robbie’s family, who seemed to know nothing about him, not that he was a dancer (and Anna’s dance partner for three years), not that he was gay, or had a boyfriend.  They were estranged from his life.  In the next scene, the fun begins as Danny (Adam Driver) shows up at the door of Anna and Larry’s apartment in the very wee hours of the morning.  We soon learn that Danny, nicknamed Pale due to his pallor, is Robbie’s older brother. He’s drunk and has shown up out of nowhere,  a month after Danny’s death to pick up his belongings.  He is hyper,  agitated and a bit of a head case.  He goes from a violent rampage on parking in New York City to homophobic slurs, to finally breaking down.  Anna tries to console him, and a strange sexual connection occurs and they end up in bed in this would be one night stand.   Would be, until two months later.  It’s New Year’s Eve and Anna and Burton in black tie attire have just returned from a party.  Larry returns from a business trip, and they are all drinking champagne.   It’s now 3:00 am and we hear that familiar bang on the door and know that Pale is back!  Anna freaks out telling him to leave, Burton has no idea what is going on, and it’s total chaos.  Fists fly as Pale and Burton (a brown belt) go at it.   Pale on the floor blurts out “are you fucking him too”?  Now that the cat’s out of the bag and Anna knows that Pale will not leave, she asks Burton to leave.  He puts up a fight, but finally relents being the wimp that he is.   Pale again winds up in Anna’s bed, but Anna goes off on him the next morning when he seems to think they have a thing.  She tells him he is dangerous, she doesn’t like him, and she doesn’t want anything to do with him.  A defeated Pale walks out, and everything is left unresolved.  Over the next month’s Anna buries her feelings in her work, choreographing a new dance, and leaves both Pale and Burton behind.  Larry knows Anna still burns for Pale, and wants to set things right.  He secretly gets a message to Pale with a ticket to Anna’s opening night, and keys to the apartment.   The note says “Why should love always be tragic”?  -Burn this.   It’s bound to be a happy ending and I would expect no less from Director Michael Mayer.  There are other complexities like the fact that Pale is married, with children, some unfinished talk about Danny’s death maybe not being accidental, but a mob hit that was plotted because he was an embarrassment to his family for being gay.

Russell, the only female cast member delivers pure emotion, empathy, compassion and passion.  Furr’s role is not large, but creates needed conflict and is convincingly spineless. Uranowitz and Driver are the life force here with perfect timing, but the Pale character hijacks the stage, and Driver is perfection as the stereotypical mobster persona from Jersey. The inviting single set (Derek McLane) is a loft apartment with a wall of windows that provide a stunning view of a New York skyline of rooftops and water towers that only changes with the use of impressive lighting (Natasha Katz) that take us from sunrise to sunset.  Well chosen musical selections (David Van Tieghem) of the 80’s  provide exciting transitioning of scenes.

The beauty of this play is the interesting contrast of characters.  Larry a quick witted and colorful gay guy in advertising who flirts with straight guys.  Burton, a straight-laced writer, elitist in a lukewarm relationship with Anna.  A soft and level headed Anna and her unlikely bedfellow (in her words), the “truculent” and lanky Pale. I struggle to find the words to explain that while this contains dramatic and deep subject matter, you must laugh at the personalities that come through.  We laugh at these characters as we sometimes laugh at ourselves and the strange way we cope with tragedy and relationships. Feel the burn now. For tickets and more information visit the show page burnthisplay.com and see how you can find available discounts at my website here  -ThisbroadSway 4/19/2019 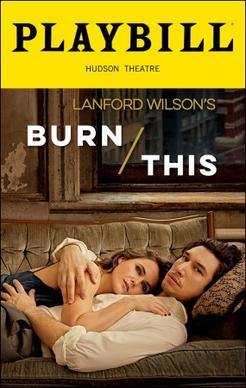