Charlie And The Chocolate Factory

Who can take a sunrise, sprinkle it with dew, cover it with chocolate and a miracle or two?  Apparently, Willie Wonka can, but not without the help of an imaginative  creative team in this updated sweet and sometimes sinister children’s classic directed by Jack O’Brien.

This stage version has been modified for the times and even includes a Presidential poke.  The story is basically the same.  Willie Wonka (Christian Borle) is looking for a predecessor to his chocolate fortune and runs a contest placing   golden tickets inside of five chocolate bars, and those lucky enough to come upon the winning bar will get a tour of the chocolate factory.   All the children are spoiled rotten privileged brats except for the very poor, sweet Charlie who was played by Ryan Foust the night I attended.  Charlie is no longer British and the cast is diverse.  Violet (Trista Dollison) is now the Queen of “pop” (as in bubble gum blowing pop) and TV Mike (Michael Wartella) is all spiked up and carries around a laptop.  The other children’s roles of Veruca (Emma Pfaeffle), and Augustus (F. Michael Haynie) are similar to the movie. Christian Borle is perfectly cast in the macabre-like role of Willie Wonka, but is a softer version of the movie character played by Johnny Depp.

Other notable cast members are triple threat Emily Padgett who plays Charlie’s mom, Mrs. Bucket, and the hilarious Jackie Hoffman as Mike's Mom.  The score (Marc Shaiman, Scott Wittman) is a fun mix of new and old, but appropriately anchored on Leslie Bricusse’s and Anthony Newley’s “The Candy Man”.

A colorful and gravity defying set (Mark Thomson) makes you want to reach out and taste something and the choreography (Joshua Bergasse) is the whipped cream on top of this sugary confection of a production, complete with orange haired Oompa Loompas.  You should get your golden ticket today and see this show that is great for the entire family.  For tickets and more information visit http://www.charlieonbroadway.com and check my website for available discounts here -ThisbroadSway 6/26/2017 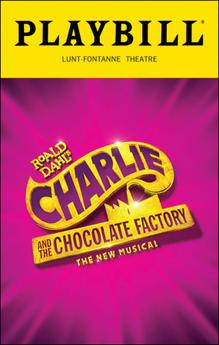