On Broadway at the Marriot Marquis Theatre

I was pleasantly surprised at how much fun I had at this Jimmy Buffett jukebox musical.  We know the songs (or at least his major hits) including “Margaritaville”, “Cheeseburger in Paradise”, and “Volcano”, but it was some of the lessor known songs such as “Son of a Son of a Sailor” that were very touching and seamlessly placed into the production.

Paul Alexander Nolan, in the lead role of Tully, an island lounging lothario, steals the show with his laid back guitar strumming and winning smile.  While he was amazing in both Bright Star and Doctor Zhivago, Escape to Margaritaville allows him the chance to shine on many levels.  Alison Luff, in the role of Rachel (and Tully’s love interest), was new to me although she had two major replacement roles in Les Miserables and Matilda. She is delightful in the role and one can feel the sparks between the two of them. Lisa Howard (It Shoulda Been You) and Eric Petersen (School of Rock) will be familiar to avid theatre goers and perfectly round out the lead four roles and the storyline.

While there are no real surprises in the story, the plot does move along and you will find yourself rooting for the good guys to win.  Especially after the recent four nor’ easters in NY it was pleasant to see a stage full of palm trees and the cast in bikinis and swim trunks drinking tropical concoctions.

So, is this a show you should put on your list to see?  That depends.  I like 90% of the shows I see on Broadway.  My thought is that by the time a show reaches Broadway, post out-of-town tryouts, years of development, and budgets which now approach $20 Million for musicals, there has to be some merit in the production. The question really becomes: what type of audience will enjoy a particular show.  Of course a producer always hopes that it will have a broad range of appeal including the tourist base and all ages.  Run to see Escape to Margaritaville if you love Jimmy Buffett (after reading up on him recently, I   must say I am very impressed with his empire, including not only his catalog of hit songs, but his hotels and resorts, restaurants, merchandise shops, retirement communities and now a Broadway show) and know all his songs by heart.  I was sitting next to a couple that did and they were having a blast while drinking their margaritas.

I love a show that sends you away with SWAG as did Escape to Margaritaville when hundreds of beach balls were released from the ceiling at the end allowing fun for the audience batting them around and a take away souvenir (with clever marketing from Margaritaville Hotels and Resorts). Interesting to note that Landshark, the beer that is prominently displayed on stage and sold at the concession stand, is a Jimmy Buffett company (Margaritaville Brewing Company).

This is a show best seen with a fun loving friend or two and when you are looking for a light hearted, feel good musical and a bit of escapism from this long, cold, snowy winter.  No matter what happens with this show on Broadway and the eventual length of its run, I am guessing it will have a long afterlife as entertainment at Jimmy Buffett’s hotels and resorts, and retirement communities (which I hear sell out as soon as they go on sale). 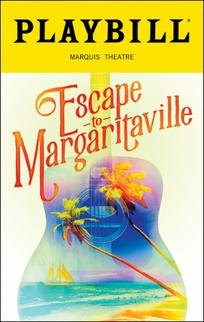