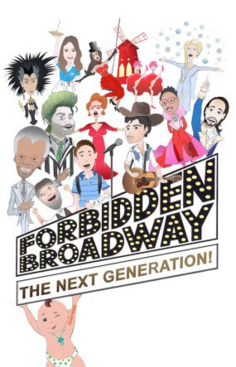 Gerard Alessandrini has done it again with his latest episode of Forbidden Broadway:  The Next Generation.  He takes a shot at the latest generation of Broadway shows and  the laughs are bigger than ever. This parody poking production has been given new life at The York Theater Company after its run at the Triad Theatre.  This new venue allows it to really open it’s wings and fly to its full potential.

The show opens with Immanuel Houston singing a Broadway tune when his one man show is interrupted by the rest of the cast who descend from the back of the theatre  as a family of obnoxious tourists looking for a Broadway show.  They sing “God, I Wanna See It” to “I Hope I Get It” from A Chorus Line. Houston re-appears as André De Shields, the conductor from the train to Hadestown, singing “Forbidden Hadestown” to “Way Down Hadestown”.  The fun continues with a Broadway Roulette Wheel where “Everything’s Got to Be a Musical” and numbers are born by a spin of the wheel.

The writing is brilliant, but you need a great cast to bring this full circle, which has been done here.  Chris Collins-Pisano is a ringer for Lin-Manuel, Bob Fosse, Alex Brightman and Damon Daunno playing Curly in Oklahoma!.  In addition to De Shields, Houston slays as Billy Porter, Jeremy Pope and, yes,  Jennifer Holliday.   Aline Mayagoitia does Bernadette Peters better than Bernadette herself, in addition to Amber Gray (Hadestown) Caissie Levy (Frozen) and Karen Olivo (Moulin Rouge!). Jenny Lee Stern shines as Gwen Verdon, and claims to be the ‘real’ Judy Garland  as she sings  “Zellweger Smells  in My Part” to “Zing! Went the Strings of My Heart” and does a mocking impersonation as Judy singing ReneeZellweger.  She is spot on as  an out of work Bette Midler making her next role in “Hello Dolly Madison” to the “Alexander Hamilton” rap from Hamilton. The youngest member of this cast is Joshua Turchin who takes on Dear Evan Hansen, and Tootsie in the famous red sequin gown.    Turchin has all the right moves and plays his roles with a nerdy adolescence that made him my favorite. These are the most challenging kinds of performances that need versatility in imitating so many roles and this cast deserves accolades, and could likely understudy many of the roles they are spoofing.   Fred Barton,  musical director extraordinaire, is the one man orchestra who passionately plays the keys for nearly the entire 90 minutes.   At the end, you wonder who had the biggest workout?

Other un-lucky Recipients of the forbidden nod are Moulin Rouge where “A Jukebox is A Girls Best Friend” to "Diamonds are A Girls Best Friend". Frozen’s  “Let it Go”, turns to “Overblown”, Dear Evan Hansen is “Evan Has-been",  The Ferryman asks “How are Things in Irish Drama"?, to the tune of "How are Things in Glocca Morra"? The poking goes on for Harry Potter and The Cursed Child and Beetlejuice.  Also The Prom, Oklahoma!, and The Rose Tattoo may be gone but are not forgotten.  Off-Broadway was also not forgotten as Fiddler On The Roof in Yiddish has its moment with “Brush Up Your Yiddish” to “Brush Up Your Shakespeare” and turn "Tradition" to "Translation".

The clean minimalist set (James Morgan) is just right with two curved staircases on either side of the baby grand at center stage. This allow the cast to move freely on multiple levels, and leaves plenty of room for the colorful copycat choreography (Gerry McIntyre).

Granted, you need to know your theatre to fully appreciate this show, but even if you don’t, the performances will stun even the novice theatre goer.  You have to be able to laugh at yourself every now and then, and hopefully Broadway will be laughing all the way to the bank. Forbidden Broadway: The Next Generation has just been extended through February 16, 2020.  For tickets and more information, visit https://yorktheatre.org and check my website on how you can find available discounts here.     -ThisbroadSway 1/19/2020