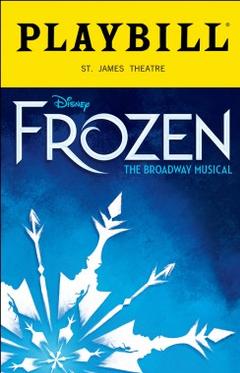 On Broadway at The St. James Theatre

Spring may have sprung but it’s still Frozen on Broadway, and by all accounts, it’s not going to thaw anytime soon. Disney along with director Michael Grandage make magic happen on the Broadway stage once again as we follow the story of Elsa and her younger sister Anna in this brand new musical which has been adapted for stage from the film of the same name.

As children, Elsa (Brooklyn Nelson)  and Anna (Audrey Bennett) are heirs to the throne in the Kingdom of Arendelle.  They have to be separated at a very young age because Elsa has magic powers that make things frozen and she accidentally freezes Anna one day.  Anna recovers, but years pass sadly for the two until one day their parents are lost at sea and Elsa must take her role as the Queen.  Elsa (Caissie Levy) and Anna (Patti Murin) emerge as grown and beautiful woman.   It’s the first time the sisters have seen each other in many years, and also the first time the outside world will be allowed to enter the kingdom in as many.  The coronation goes off without a hitch as Elsa wears a glove to contain her magic.  It’s a joyful time in Arendelle once again with music and dancing.  Anna becomes smitten with a young prince Hans (John Riddle) whose impromptu proposal is questionable to say the least.   Elsa is furious when Anna ask for permission to marry someone she barely knows, and  this leads to a heated argument where Elsa loses her glove.  She freezes the entire kingdom and when the villagers start screaming witchcraft,  Elsa flees to the mountains where she cannot hurt anyone again.   Anna sets off alone to find her, since no one else wants the snow blowing Queen back.  On route  she meets Kristof (Jelani Aladdin) the iceman, his loyal reindeer Sven (Adam Jepsen) and convinces him to help her find her sister.  They run into Olaf, a living snowman who Elsa had created for Anna years before and the three set off together.  Eventually they find Elsa, and things are returned to normal at the Kingdom. Anna finds her true love where she doesn’t expect it and in true Disney fashion, there is a happy ending for all.

Caissie Levy may have found her perfect role as Elsa.  She is stunning and radiant on the stage and she sings as if the music was made for her.  She performs a soft, and effortless version of “Let it Go" that left me in tears. Patti Murin is equally impressive as the free spirited Anna with a powerful voice and is the kind of Princess that puts on no “heirs”. The talented ensemble cast includes Robert Creighton of Cagney fame, who is comical as Weselton, and shows off his vocal and yankee doodle dancing abilities.  Olaf is brilliantly brought to life by an ultra-talented Greg Hildreth who operates this life sized puppet created by Michael Curry with perfect precision.  This jointed character moves in ways that would not be possible of someone just wearing a costume and is just another ingenious touch that make this production spectacular.   At first I thought Sven the reindeer might be two people underneath a playful costume, but it was just one very flexible Adam Jepson, trotting about the stage; at times setting himself down for a rest.  I hope he has a good chiropractor.  Speaking of costumes, Christopher Oram designed the dazzling attire,  which you would never know were incredibly heavy  as you watch Levy,  Murin and the rest of this  cast moving majestically about the stage to the elegant choreography of Rob Ashford.

The story follows the film closely but there are  plenty of added surprises, and unlike Trix, this is not just for kids anymore and now includes some welcome adult humor that make this an “E” rated musical to be enjoyed by everyone.  There are some wonderful new additions to the score (Kristen Anderson-Lopez and Robert Lopez) and the blockbuster anchor song “Let It Go” gets a whole new life on a set (Christopher Oram) of magical illusion created with beautiful lighting and projections (Natasha Katz, Finn Ross).  Hues of blue and green transform the stage into a frozen paradise that   make the aurora borealis pale.  The special effects (Jeremy Chernick) are astounding.  It’s a sensory overload as icicles burst through the stage, and walls appear to freeze and crackle before your eyes.    And let’s not forget snow.  There is more snow on this stage than we’ve seen all winter on Broadway.

Children’s stories all have an important message and one that we grownups sometimes need to be reminded.   “Love conquers all” is the message here, and there is no better time than the present to be reminded of this fact. I haven’t left the theatre feeling so good in a very long time.   I was not sure if the unpredicted snow flurries that were falling as we left the theatre were the work of the Frozen technical crew, but it was a perfect ending to a night that truly warmed my heart.  Join the list of want to be audience members  and get your tickets now at http://frozenthemusical.com