Off Broadway at Paper Mill Playhouse

Joyce Randolph may have been the only surviving cast member in attendance at the opening night of The Honeymooners,   but the rest were there in spirit, song and dance in this all new musical stage adaption of the 1950’s classic television series and oh how sweet it was!

Ralph (Michael McGrath), Alice (Leslie Kritzer), Norton (Michael Mastro), and Trixie (Laura Bell Bundy) are back, and in living color.   We find all the similarities of the original show, but this time they are doing it to a lively and touching score by Stephen Weiner and Peter Mills with keen direction by John Rando.

Ralph is always cooking up some harebrained get rich quick scheme, and   while tradition continues, it’s been refreshed.  This time he convinces Norton to enter a jingle contest and it’s only going to cost them $40 to rent a piano.  The product at the center just happens to be Ralph’s favorite Faciamatta Cheese, and he’s convinced he’s a shoe in to win.  The comic delivery has the audience in stitches   as new punchlines are combined with some of the memorable skits of the original, like Norton playing the intro of Swanee River on the piano before playing anything else.  It’s a big surprise when they win contest and get offered positions with the Upshaw and Young Ad Agency.   The future finally looks bright for these two blue collar Brooklynites but of course it can’t end here, and it doesn’t.  You gotta love the underdog, and that’s why we always had a soft spot for Ralph Kramden.  You wished that just once he would get his big break and come out on top and maybe this time he’ll get his chance with the help of writers Dusty Kay and Bill Nuss.

The casting is sheer perfection, and at times I forgot these were actors. Michael McGrath in this bigger than life role is in complete harmony with Ralph, and appears to be channeling the bus driving raccoon.  Michael Mastro not only has the Ed Norton character pegged, but his outstanding vocals clearly were not born in the sewer. The characters were all created to a T in body, mind, accent and spirit with one exception. Trixie.  She was unlike the original timid sweet friend of Alice.  This Trixie had a “sexy” undertone with a showgirl past (which was actually true of the original character, but it was not well known), and gets involved in some unsavory and uncharacteristic activity.  I can’t say I minded this change, but it didn’t flow with the other characters remaining exactly the same. Bell Bundy still pulls off a great performance, and I heard she did it all with a broken toe, ouch!  Leslie Kritzer outshines this already shining cast when she belts out ‘A Woman’s Work’   and brings this woman’s role into the Twenty-first century  and out of the dark age ideology.  When Jackie Gleason (Michael L. Walters) makes a cameo for the Cavalcade of Stars show finale, you will think you are seeing double. Walters is a respected Jackie Gleason impersonator, and his look, movement and sound are remarkable. A colorful and adept ensemble cast have all the right moves under the creative eye of choreographer Joshua Bergasse and dance arrangements of Sam Davis to make this musical bound for Broadway.

You might not imagine the replicated shabby apartment of the Kramden’s make for a very exciting set, but leave it to Beowulf Boritt to turn the drab to fab with sensational elements including a larger than life recreation of the classic New York City skyline complete with the full moon rising.  Jess Goldstein adds pizazz with her colorful, glamorous and fun themed costume designs.

I don’t know the future of this musical, but I sure hope it gets its chance on the Great White Way.  The Honeymooners will be playing through 10/29/17 at Paper Mill Playhouse in Millburn, NJ.  For tickets and more information visit https://papermill.org/ -ThisbroadSway 9/28/2017 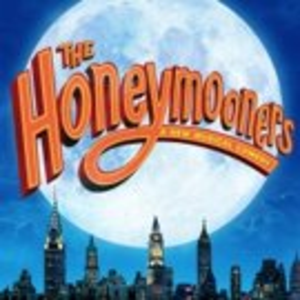