On Broadway at the Broadhurst Theatre

Jagged Little Pill is a musical that is more  today than today. Itself. I mean let’s talk about mixed race family, opioid addiction, gender bending, LGBTQ and while your at it, let’s talk about me too.  No, I mean #metoo.

Meet the Healy’s, the perfect all American family living among the upper crust of Connecticut, but everything is not what it seems on the outside. Mom, Mary Jane (Elizabeth Stanley) is a closet junkie who became addicted to opioids after a car accident.  Dad, Steve Healy (Sean Allan Krill) is working so hard to support their perfect life, he is clueless about what is going on.    Their son Nick (Derek Klena), a jock who just got accepted into Harvard (mom and dad expect nothing less, but no pressure Nick) and daughter Frankie (Celia Rose Gooding) who is obviously adopted and the only person of color in her family. What could go wrong, right?

While dad’s at work, mom is buying drugs on the black market, Frankie is busy being an activist and experimenting with her sexuality  having a lesbian affair with Jo (Lauren Patten) and also carrying on with Phoenix (Antonio Cipriano), a boy in her class.  Harvard bound Nick in a moment of rebellion attends a party and is silent witness to classmate Bella (Kathryn Gallagher) getting raped by his best buddy Andrew (Logan Hart) while she is over-served and unconscious. These events  are the framework of this musical and the individual stories that sprout like a well fed sapling.  Frankie feels lost in this white family and cannot find her own identity. Nick must never fail to meet the high expectations of the family and Mary Jane struggles to keep her deep dark secrets hidden, always portraying the model wife and mother.  Feelings are crushed, futures re-written, relationships ruined, and failure is inevitable as the story develops before wrongs are made right and lies become truth.

I have a new found respect for Alanis Morissette (and Glen Ballard), who wrote all of this music that is brought to new heights by this remarkable cast.  You might have a hard time believing that this score was not written as a musical, because it flows so perfectly with the story and many of the songs seem to carry a tone that is familiar throughout making this feel nothing like a jukebox musical. Patten’s number “You Oughta Know” is a showstopper, and gets a mid-second act standing ovation every show from what I hear.  That’s not to say that the other numbers are not fabulous, because all of the songs  are performed with perfection and emotion overflowing.  Stanley’s sings with feeling that digs into your soul  and the sweet sounds of Klena and Hart and Cipriano will bring you to tears. When they said the apple does not fall far from the tree, they must have been talking about Celia Rose Gooding, who is the daughter of Broadway superstar La Chanze.  A star is born in this newbie who can belt,  dance, and shines on the stage.

Incredible choreography (Sidi Larbi Cherkaoui) has one scene that plays out in complete reverse, and another where Mary Jane overdoses on the couch that brings a ghost like younger version of herself twisting, turning, tumbling in an act of contortion that is transcendent.  The beautiful gender fluid ensemble cast are totally absorbed in the sexy and jerking movements that further translate the emotional subject matter.  The set (​Riccardo Hernández) is full on modern with moving screens that transition the scenes with  displays of colorful projections and video (Lucy Mackinnon). That along with the lighting (Justin Townsend)  sets the mood and enhance the whole theatrical experience directed by Diane Paulus.

This is definitely not a hard pill to swallow, so pick up your prescription for this   must see musical of the 2019/20 season. For tickets and more information visit https://jaggedlittlepill.com and visit my website for available discounts and other promotions here  -ThisbroadSway 2/4/2020 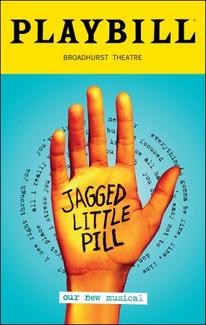