Men heed this warning. If you are having an affair or just thinking about it, seeing this play may put a damper on your plans and this psychological thriller directed and written (after Euripides) by Simon Stone may very well leave you gasping for breath.  While based on a very old Greek myth,  what is really old about infidelity, mental illness, divorce and….filicide?

In this modern day Medea, we begin with Lucas (Bobby Cannavale) settling his wife Anna (Rose Byrne) in at home after a stay in the mental hospital.  They have two sons, Edgar  and Gus played alternately by  Gabriel Amoroso, Jolly Swag, Emeka Guindo and Orson Hong.  We soon learn the reason Anna was in said mental hospital.  She was poisoning Lucas.  Lucas and Anna are both in the scientific field, so I guess they know a lot about how to poison someone.   As you might guess, the two are no longer a couple but Lucas is staying involved for the sake of the children who still love their mother.  The story is a nail biter as the underlying causes of the breakup of the marriage and the genesis of Anna’s mental breakdown are slowly revealed.  Lucas does his best to comfort Anna, and provide a balanced life for the children, but Anna is living in another dimension believing that they can go back to their once normal lives.  The truth of it is that Lucas has already moved on with plans to marry the bosses daughter Clara (Madeline Weinstein).  The affair was discovered by Anna through text messages, and this is what sent her off the rails.  So while Lucas may appear the good guy,  his cheating heart was the cause of this mess in the first place.    The damage is irreversible and Anna is batshit crazy.  He should have seen the writing on the wall when Anna pours herself a bottle of wine fresh out of the mental hospital. Suffice it to say, it probably didn’t mix well with  anti-psychotic meds and that he probably shouldn’t leave his two kids alone with her.  And he might have tried to exercise a little self-control when Anna swears to give him a divorce if he sleeps with her just one more time.  But then if any of those things happened this wouldn’t be a very good play or an interesting one,  nor would we be able to otherwise digest the destruction that would follow.  The set of stark white (Bob Cousins) was a stunning clean palette that gave the darkness, blood and shock of this production nowhere to hide.  Also included was a white screen that captured close up video projections (Julia Frey) of live action happening on the stage that added dramatic effect.  The performances and synergy  of real life partners Bobby and Rose were awe-inspiring, not to mention that they are both easy on the eyes.  I do hope in this case they don’t bring their work home with them! The children and supporting cast were also commendable and rounded out this brilliant day of theatre.

This show may be gone, but it will not be soon forgotten.  If you missed it, I’m sorry, but make sure you visit BAM for other upcoming events. They have wonderful productions that are worthy of the discriminating theatre goer.  -ThisbroadSway 02/09/20 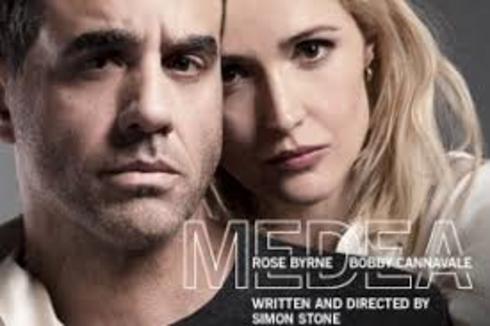