On Broadway at the Al Hirshfeld Theatre

Parlez Vous Francais?  No, you say?  Well you can put your Rosetta Stone away because Moulin Rouge! is delivered up in perfect English, and with over 50 popular songs this Baz Luhrmann film is brought to life on the Broadway stage by director Alex Timbers.

When you enter the theatre  (be sure to arrive as early as possible to take full advantage of the pre-show, where the cast and ensemble sexily move about the stage) you will experience a visual feast (Derek McLane, Set and Justin Townsend, Lights).  A spectacle of lights of enormous proportion.  Rouge, being the theme…there is a lot of it, and it’s breathtaking.  The set is anchored by the iconic windmill of the Moulin Rouge above the left orchestra and a large elephant above the right, which is the quarters of our heroine Satine.

A simple love story brought to life by an eclectic mix of popular song medleys (Justin Levine, Orchestrations) from Nat King Cole’sNature Boy, to Gaga’s Bad Romance, but this is not any ordinary jukebox musical.  In fact, there is nothing ordinary at the Moulin Rouge.

Christian (Aaron Tveit) arrives in France from the United States in search of truth, beauty, freedom, and love . A singer, composer, he wants to release his music to the world.   He befriends other creatives Toulouse-Lautrec (Sahr Ngaujah) and Santiago (Ricky Rojas) and they hatch a plan to have Christian meet Satine (Karen Olivo), the star of the Moulin Rouge and convince her to let them perform their play at the Moulin Rouge.  The establishment is facing bankruptcy, and the owner Harold Zidler (Danny Burstein) is hatching a plan of his own to marry off  Satine to the rich Duke of Monroth (Tam Mutu) to access his money and save club.  On this night Christian is mistakenly identified as the Duke by Satine, and takes him back in her room where they fall in love.   Soon the real Duke shows up, and finding them in a compromising position, they make up a story that they are practicing for their new play.   The others show up, and ad-lib a performance of their play, which the Duke agrees to finance, with certain conditions.  He will own Satine and the Moulin Rouge.   Satine and Christian secretly continue their love affair, until the Duke catches on and threatens to kill Christian.   Always looking for the happy ending, Satine has consumption and there just is no cure, but can love conquer all?

This cast is refined, and thoughtfully chosen keep the essence of the characters from the film, but, If you are  fan of the movie, you may have a hard time accepting the stage  version of Satine.   She is dark and sultry, and is a far contrast from the softer, and fair-haired Nicole Kidman, but she has a set of lungs that won’t quit and a pair of legs to match.  Tveit is dreamy to look at and listen to, and is the ultimate young lover.  A jovial Danny Burstein as the ‘master of ceremonies’ is always meticulous in his craft and is an audience favorite.   Watch out for Nini (Robyn Hurder) who plays the love interest of Lautrec, and has some titillating dance numbers and moves her body in ways that will leave you in awe. The characters of Lautrec and Santiago are fun and quirky, and often hilarious.  The lead cast along with the ensemble sing and dance to a dazzling choreograpy (Sonya Tayeh). The Costumes (Catherine Zuber) ooo la la, are drop dead gorgeous, Period!  Yes, turn of the 20th Century, with lots of frill and vibrant colors.

It may be early to talk Tony for this newbie, but this one has Tony written all over it.  Tickets are going like hot crepes, and while no discounts are available, you can always try for the virtual lottery at Lucky Seat.   You can enter for the entire week with one entry and tickets are only $29.00.  For regular tickets and more information visit https://moulinrougemusical.com and see this show tout de suite.  You can spring for the pit seats for a premium, but I’d much rather be back a bit to take in the full views of this spectacular production.  ThisbroadSway 8/20/19 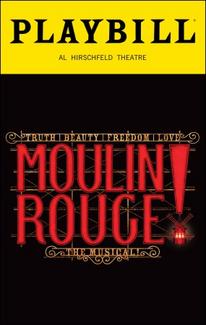