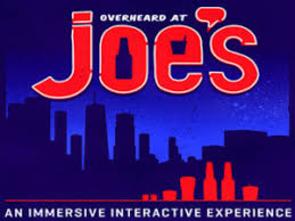 There is an interesting social experiment going on at McHale’s Bar on West 51st Street, and this is something you might want to get in on.  On special nights the second floor of this Pub turns into Joe’s Bar, a theatre of sorts where you are going to want to say what’s on your mind.

This venue is an actual bar where you can get real drinks and real food.  It’s the people, or at least some of them, that are just characters in this interactive play.    The patrons get seated at tables or at the bar and cast member are planted in with customers.  Some you might suspect, and others you might not know until the end when the cast is announced. A guest musical artist appears at each show.  On this night it was Michelle Shocked,  a Grammy nominated recording artist.  She played the guitar and sang the blues while sitting perched on a rail and this was how things got underway. It’s led by Gabriel (Christian Kelty)  who promises that this is a total improvised show with no script, and changes every night.  He encourages people to say something if they have something to say.  He directs questions to get things in motion. After Michelle’s round of blues songs he asks a patron,  “how do you make yourself feel better when you have the blues?” and one question leads to another. It’s not long before people are throwing out their opinions, and funny stories.  Random guests show up, and add their own twist, and you now become engaged with their drama, and quite organically start asking them who, why, what, and start giving them advice.  It becomes pretty energetic at times, like when people started chanting ‘Judge Judy” while pounding their fists so that poor Hazel can get her loser ex-boyfriend to pay her the $1000 he owes her. It’s like going to a bar, but better, because everyone is interacting.  Your having a conversation with the whole bar, and the cast, whoever they  may be.  It’s was especially nice for me, as I was alone on this evening, but had no shortage of interesting conversation.

I found this evening very insightful, to listen to other peoples different reactions to the same situation.  It really opened my mind to and got  me thinking, which I always think is a good thing, because a mind is a terrible thing to waste.  I was impressed that people got engaged in the experience, and put their cell phones away.  I saw no evidence of picture taking (except I did snap a photo for the purpose of this blog), or texting.  In fact the only person I saw texting, was Hazel, one of the characters.

Christian Kelty, creator and director, credits his grandmother who came over from Poland with the idea of the authentic speakeasy.  A real place where people can talk freely and not a place that hipsters think of as speakeasy (I forgot how Christian described it, but it was funny and true).  I think I’ll go back and see it again since you never know what kind crowd will show up on any given night in New York City.  I highly recommend you give this a try.  For tickets and more information visit www.overheardatjoes.com