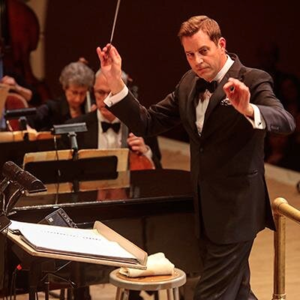 ​​
It was girls night at the New York Pops, and I couldn’t think of a better way to kick off the holiday season than with a magical evening at Carnegie Hall with Steven Reineke, his New York Pops Orchestra along with some very special guests.

The New York Pops is a quintessential part of  our New York City Culture and Conductor Steven Reineke has all the right stuff, including dashing good looks and lots of pizazz to make this a night you will never forget .   Tonight's Guest Artists are stars in their own right both currently starring in Broadway Musicals.    Adam Kantor, in this seasons Tony hopeful, The Band's Visit, and Betsy Wolfe of Waitress, running on Broadway since 2016 with both Grammy and Tony nominations to its credit.

This night of “Women of Notes: In Dedication to Female Composers” began with an overture from Once Upon a Mattress by Mary Rodgers (daughter of Richard) followed by Betsy Wolfe singing “Shy" from the same production.   Adam Kantor then took the stage singing a tune from Betty Comden’s (with Leonard Bernstein and Adolph Green) On the Town, but not before asking the question “can you tell me how to get to Carnegie Hall?,” which is a line from the actual musical spoken by character Gabey.  Adam and Betsy in a duet sang “The Best is Yet to Come" by Carolyn Leigh (with Cy Coleman).  The Pops took over at playing an instrumental version of Dolly Parton’s iconic “I Will Always Love You,” made ridiculously famous by Whitney Houston followed by Kantor singing another classic, “Will you Love Me Tomorrow,” (Carol King) dedicating it to his Mom who was proudly seated in the audience.   Special Guest Ingrid Michelson sang her own “Miss America” (with Lawrence Dopson, Ryan Stockbridge and Jenny Owen Youngs) with Wolfe,  and Georgia Stitt made her Carnegie Hall debut with Kantor singing “Sonnet XXIX" (Stitt/William Shakespeare), and has a musical coming to Broadway in 2018.  Act One closed out with “Back to Before" (Lynn Ahrens/Stephen Flaherty) from Ragtime sang by Wolfe, who was also in her fourth of six lavish gown changes of the evening, which is  bound to be a Pops record.  In the second act, Jeanine Tesoro was honored with selections written by her along with Dick Scanlan from Thoroughly Modern Millie followed by a beautiful rendition of "Falling Slowly" (Marketa Irglová/Glen Hansard) from Once by Kantor and Wolfe.  The big moment I was waiting for finally came when Shaina Taub was introduced.  Just a babe, Shaina has taken the musical theatre world by storm, composing such fresh, original musical compositions and you know it’s only the beginning of a very illustrious career for her.     Adam Kantor  sang Shaina’s “O Luck Outrageous” while she accompanied at the keys.  Sadly, she did not harmonize along, but make no mistake that Ms. Taub can sing, and has a voice that’s pure and lovely unlike any other you have heard before. There is never any shortage of wow moments at the Pops, and so it was with Kantor’s “Fast Car” version of the Tracy Chapman hit.   This celebration could not have been wrapped up more appropriately in following the theme of the evening with Betsy Wolfe singing a Sara Bareilles song, “She Used to Be Mine" from the musical Waitress,  only to be one up’d when Sara Bareilles herself takes the stage in a short black princess dress with a sexy plunging neckline.   These two hot numbers closed out the show with “Chasing the Sun” (Sara Bareilles/Jack Antonff) and the entire cast came out for the encore of "Ain’t No Mountain High Enough" (also written by noted woman, Tammi Terrell along with Marvin Gaye) which had the whole house on their feet.  Don’t miss the  Pops next performance on December 14th and 15th with guest artist Megan Hilty.​ For tickets and more information about the New York Pops visit  http://www.newyorkpops.orghttp://www.newyorkpops.org -ThisbroadSway 11/17/17