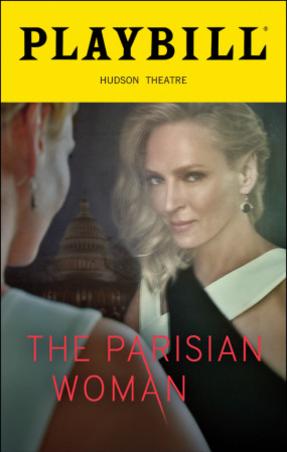 If you think the best scandals in our Capital are only taking place in the White House, you’ll think again after a visit to the Washington townhome of Chloe and Tom, a not so typical D.C. power couple.

In the opening scene, we meet Chloe (Uma Thurman), the ultimate modern woman, with her very needy lover Peter (Marton Csokas) who is obsessed with her, and tortured by the idea she might be entertaining other lovers behind his back. This becomes amusing when Tom (Josh Lucas), her husband, comes home early.  That fact that she is married, is not Peter’s issue.  In fact, the two men are somewhat friendly, and Peter is even in a powerful enough position in D.C. to help Tom get the nod for the open seat on the Fourth Circuit Court of Appeals which he is being considered.   Chloe and Tom have an apparent loving marriage, where discretionary affairs are permitted.  Tom is a powerful tax attorney, and Chloe is the supportive wife and something of a socialite.   While they are not conservatives, they stay in the game through neutrality and Tom’s high power clientele who are major contributors to the republican pot.     The trouble begins when Chloe cuts Peter off, and Tom is suddenly passed over for the position on the Appeals Court.   Chloe confesses that it is all her fault leaving him crushed, but the faithful, unfaithful Chloe has another trick up her sleeve.  This involves meeting with her frenemy, and the other powerful woman figure in this play, Jeanette (Blair Brown), who is the head of the Federal Reserve with a direct line to the President.  Jeanette is mother to Rebecca (Phillipa Soo), who is fresh out of Harvard Law and is on the political fast track and eventually becomes very important to the plot.   Chloe and Jeanette meet for a pleasant tea, and you never see the bombshell that Cloe is about to deliver coming.  Even though it took forty or so minutes for this to develop, it was shocking enough for much of the audience to react with an audible gasp, present company included.  Chloe is sexy, cool and calculating as she brings Jeanette to her knees, and gets the desired results.

Could this have been a deeper political drama?  Yes, but I’m glad it wasn’t.  Frankly I’m sick of hearing about White House drama, and the cheap and repetitive Broadway responses.  I loved that they never actually said the name of the President, and I won’t either, because sometimes there is actually too much of a bad thing.  I thought some of the Presidential pokes were very realistic as opposed to the exaggerated versions that we see in social media, film, television and theatre.   One example was a comment made in response to Tom’s doubt that a tax attorney could hold a position on the Fourth Circuit Court of Appeals is “public opinion doesn’t matter anymore.” It’s sad, but true.

There were a few problems with The Parisian Woman, but Thurman and Brown were powerfully perfect, and it is certainly worth the trip to see a scintillating Uma Thurman manipulate a city that always seems to be manipulating us.  For tickets and more information visit https://parisianwomanbroadway.com and visit my website for available discounts here.  -ThisbroadSway 11/28/17