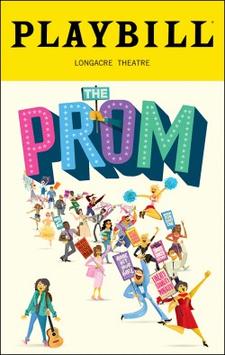 On Broadway-at the Longacre Theatre

Can a bunch of Broadway has-beens learn the real meaning of giving and help to make a difference in a young girls life?     In this season of giving, you should go an find out.

It’s opening night of Eleanor Roosevelt The Musical and  this cast of seasoned actors couldn’t be more impressed with themselves as they await the opening night reviews.  They are in for a rude awakening when reviews label them as a bunch of aging narcissists, and the show closes on opening night.   What happens next is downright hysterical when  this brazen bunch take up a cause for all the wrong reasons and try to save The Prom for one young girl.

You know that this musical is going to be great fun from the moment  leading Lady Dee Dee Allen (Beth Leavel),  and flamboyant leading man,   Barry Glickman (Brooks Ashmanskas) step on the stage.  The two are over the top hilarious, with supporting humor by Press Agent, Sheldon Saperstein (Josh Lamon), and friends that include chorus girl, Angie (Angie Schworer) and  fellow actor Trent Oliver (Christoper Sieber).

In their current washed up position, Barry suggests they take up a cause to get back their public appeal and prove that they care about something other than themselves.  They find just the cause they are looking for at James Madison High School in Edgewater, Indiana  and the five of them take off for the Hoosier State.    The small town is in chaos because Lesbian Emma (Caitlin Kinnunen) wants to bring her girlfriend to The Prom.   A homophobic PTA  led by a repugnant mother, Mrs. Green (Courtenay Collins) is  up in arms and wants to cancel The Prom rather than compromise their values.  The school principal  Mr. Hawkins (Michael Potts),  seems to be the only voice of reason and announces at the PTA meeting the State’s Attorney says The Prom should be  inclusive, as this best reflects America’s values and Mrs. Greene shouts, ‘this is not America, this is Indiana’.   The two worlds collide and unfortunately for Emma, her small-town story is about to become a big-time embarrassment when the Broadway crew come in like gangbusters, staging protests, contacting the media,  and make things worse as the conservative town people become more threatened by all the attention.   This causes stress between Emma and her closeted girlfriend, who we learn is none other than the daughter of  Mrs. Green, Alyssa (Isabelle McCalla).    When the school is  forced to have The Prom, the community, led by Mrs. Green,  hatch a plan that moves The Prom location and leaves Emma all dressed up in an empty gymnasium.  Alyssa swears to Emma that she had no idea about the change of location, but the tension is just too much, and they break up.  It looks like mom has won, but on Broadway it ain’t over ‘til it’s over and they are  just not going to have it.   Their put on charity act turns real when they start pulling out of their own pockets to put on a proper Prom and they find true caring in their hearts under their self-absorbed exterior.  Emma takes matters into her own hands, and delivers a heartfelt message on social media that goes viral.  The kids turn on Mrs.  Greene, and Alyssa finally comes out in front of her mom and everyone and a real Prom is born.

This cast led by Leavel and Ashmanskas are uproariously funny and belt out tune after tune with their well-tuned voices.  The ensemble cast made up of young, cool and agile tweens, do a fantastic job of the modern-day  choreography by Casey Nicholaw, who also directs this production.  The score (Matthew Sklar/Chad Beguelin) is  full of beautiful ballads with music that mix classic Broadway melodies with popular beats.   Kinnunen and McCalla both have unforgettable sounds that put the heart into this funny and touching musical. Both the set (Scott Pask) and  costumes (Ann Roth/Matthew Pachtman) were colorful,  and glittering,  but  Dee Dee’s costumes were the most eye-catching and complimented Leavel’s long and lovely frame.

This is a hilarious take, on real life issues, and full of heart and soul that you will want to be a part of.   For tickets and more information visit and check my website on how to find available discounts here -Thisbroadsway 11/11/2018